I’ve written a little bit about Helen Fortna previously in the post where I tried to figure out how she was related to our family.

But although I haven’t seen Helen since the mid-60s (to the best of my recollection; she’s about four years older than I am, so I hope she’s still doing well wherever she may be), I do have another memory of her. It was the time when she entered the Miss Lebanon Valley contest, a precursor to the Miss America pageant.

Helen was what might be called a statuesque blonde (she stood five feet nine and a half inches), although her hair was bleached, which is one of the things that I remember. In those days (1963) my mother had a beauty shop in the rear of our home, and when it became known that Helen had entered the beauty contest, she was the subject of some chatter. Mainly, as I recall, that a bleached blonde shouldn’t be eligible to be Miss America (or any of the precursor Misses). I didn’t see why not; bleaching was just another form of makeup, and as far as I could tell the contests didn’t ban cosmetics.

The other thing that I recall, and don’t ask me why I remember this, was that when her photo appeared in the Lebanon Daily News with a brief bio, the article began something along the lines of “Helen Fortna will not be bringing her batons to the competition but will demonstrate her organ playing skills instead.” I couldn’t have read that article more than once or maybe twice, and I certainly haven’t seen it since March 22, 1963, when it was published. That is, I haven’t seen it until today, when I found it on the newspaper archive site.

Oh, and in case you were wondering, no, she didn’t win. Sadly, she didn’t even place or show. 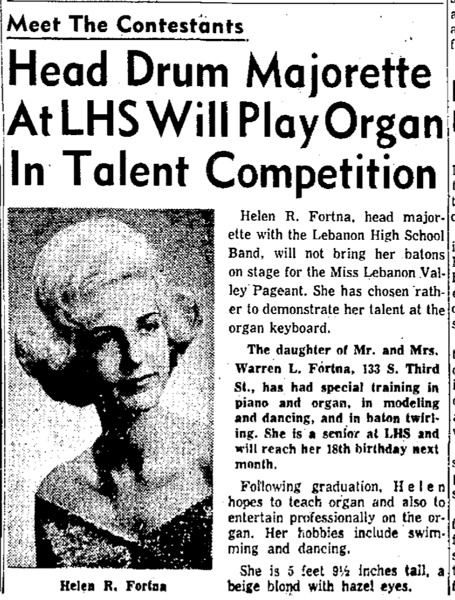