I ordered the Downton Abbey Movie Blu-ray from Amazon.com some time back. It was just released a few days ago, and the Postal Service delivered my copy on Thursday. I received the text message that it had been delivered, and within five minutes I went to retrieve it.

A word about my building. I live in a four story little building with one apartment on each floor. It was built about three or four years ago on the same lot where an older but larger apartment house sits. And there’s the problem. Because both buildings are on the same lot, the city, and therefore the Postal Service, refuses to consider it a separate address. I assume that has something to do with the way they manage addresses for tax and other purposes. So the Postal Service delivers all mail and packages addressed to this building to the main, larger building. Technically, we are supposed to use that building’s address instead of this one. It has led to all sorts of problems, but I won’t go into all the details here.

As I said, within five minutes of receiving the text that it had been delivered, I rushed down to the other building’s lobby to collect it.

And it wasn’t there!

Now this could have several different explanations, the most common one being that the mail carrier had scanned it when she picked it up rather than at delivery time. So I went looking for her, and it didn’t take me long. She said she remembered delivering it, and showed me where she had placed it on the floor (it was too large for the mailbox and the building doesn’t have a concierge or secure area).

Well, that could only mean one thing. Some cretin in the larger building had swiped it within minutes of delivery. Not the first time it has happened. 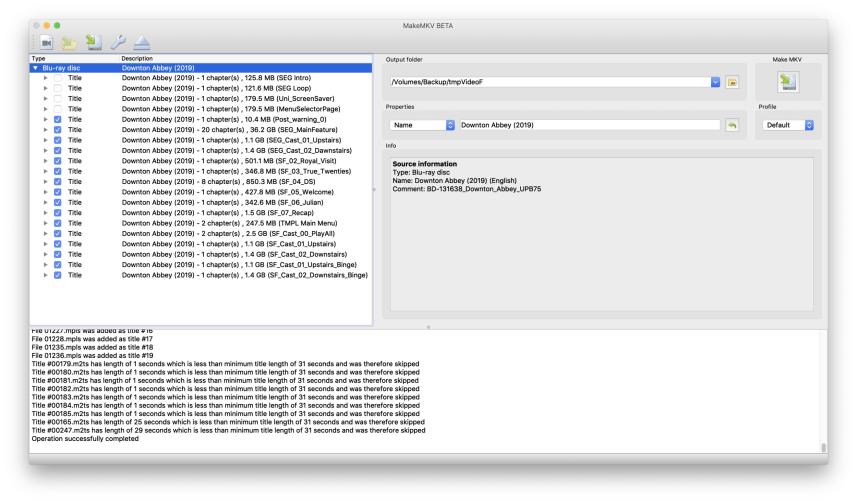 I did complain again to my landlord even though I know there’s nothing they can do. Anyway Amazon was nice enough to send a replacement just on my say-so that it had been stolen. It was due today.

Not wishing to suffer a recurrence of the theft, I’ve been periodically running outside to see if there is any sign of a mail carrier or postal truck. In fact, I had just come inside and removed my outer garments when I received a text that it had been delivered.

So I rushed down, putting on my cap and jacket as I flew down the stairs, and lo and behold! When I got to the first floor, there was a mail carrier standing outside the door with my package. My guess is that she had scanned it before coming to deliver it and then pressed my doorbell as I was running down the stairs. One of the nice things about Sunday delivery is that not all the mail carriers know it is verboten to deliver directly to this building.

So I’m ripping it now so I can add it to my Plex library. Unlike the Downton TV series, PBS has nothing to do with the movie, so the Blu-ray is much easier to rip. In fact, like other newer Blu-ray discs coming out lately, it actually has the various clips labelled. Although whoever authored the Blu-ray could have used a spell checker when labeling the “Downstairs Cast Conversations” extra feature.

One thought on “The Downton Movie”