I’m reading, or rather re-reading Steve Swayne’s book How Sondheim Found His Sound, as I first read it in 2005 when it was published.

Of course, I’ve forgotten a lot since first reading it, but one quote from Mary Rodgers really surprised me.

Oh, and Mary’s father was Richard Rodgers. I think he was a composer as well.

Anyway, Mary met Sondheim when they were about 15 years old, when Richard brought the family to Oscar Hammerstein’s farm in Doylestown, Pennsylvania. Mary thought Stephen was the most intelligent person she had ever met and fell head over heels in love with him.

Alas, Sondheim had to explain that nothing could ever happen between them, and he must have been tactful because they remained best friends for the rest of her life.

In fact, they even collaborated on a song, Stephen writing the words and Mary composing the music, for The Mad Show in the early 60s. BTW, Sondheim wrote the song’s lyrics under the pseudonym of Esteban Río Nido.

Here is Ilan Waldston giving a very nice rendition of that song which was a parody of another song that was popular at the time.

Anyway, what surprised me, and I’m sure I must have seen it before, so I guess I just forgot it along with lots of other stuff, was a quote from Mary Rodgers.

Now her father Richard was notoriously hard to get along with, unlike his collaborator Oscar Hammerstein who became a second father to Sondheim. I knew that Sondheim had had his problems dealing with Richard Rodgers, but apparently Mary had problems with her parents as well.

In fact, she is quoted as saying: “It was my fantasy that my parents would die and I would be adopted by the Hammersteins.” 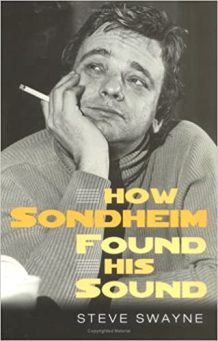 Note: When you purchase something after clicking Amazon links in my posts, I may earn a small commission. As of this date, I have yet to earn anything. 😎