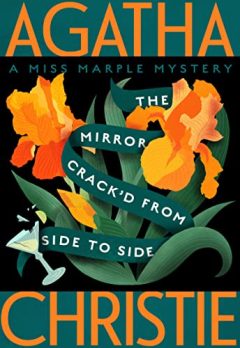 I’ve been a fan of Agatha Christie’s whodunits ever since I was a teenager, and I’ve probably read 90% or more of her mystery novels, many of them more than once.

One way of dividing up her stories is to classify them as those where I forget most of the plot (including whodunit) after a few years and those where a single reading impresses the details firmly in my mind for all time.

Re-reading either type can be a pleasure. In the first case I have the fun of once again trying to solve the mystery before her detective does, and in the second case I can watch as she works her misdirection and palms the ace in full view.

Usually when I remember a plot’s details, it’s because Christie came up with a devilishly clever solution, as in Murder on the Orient Express (although I know of at least one person who did forget the details of that one).

But sometimes I remember the solution for another reason. Such is the case with the Jane Marple mystery, The Mirror Crack’d from Side to Side.

Alas, I can’t reveal why I remember that one without spoiling a vital plot point.

I just re-read that book, and of course, knowing the solution, it all seems so obvious because Christie makes no effort to hide any of the important clues, she just keeps repeating them over and over. Well, there is one that she reserves for near the end.

The book gets its title from a Tennyson poem, The Lady of Shalott:

The mirror cracked from side to side;
“The curse is come upon me,” cried
The Lady of Shalott.

Although the novel was published in 1962 when Christie was no longer at the height of her powers, it’s plotting is still among her best, although I think it could have used a little more editing as there is one murder and one coincidence too many, as far as I’m concerned.

It’s the last Miss Marple book that takes place in St. Mary Mead, and it contains references to and at least one character from the earlier Miss Marple triumph, The Body in the Library. Dolly Bantry has sold Gossington Hall after her husband Colonel Bantry died, and it’s been taken over by some movie people who have totally renovated it. Although Miss Marple is older than ever (her age is never given), her mind is still sharp as a tack and she takes all the changes to her village in stride. After all, mothers still

came out on doorsteps calling to their children who, as usual, were busy doing all the things they had been told not to do. Children, Miss Marple reflected gratefully, never changed. And presently she began to smile, and noted down in her mind her usual series of recognitions.
That woman is just like Carry Edwards—and the dark one is just like that Hooper girl—she’ll make a mess of her marriage just like Mary Hooper did. Those boys—the dark one is just like Edward Leeke, a lot of wild talk but no harm in him—a nice boy really—the fair one is Mrs. Bedwell’s Josh all over again. Nice boys, both of them. The one like Gregory Binns won’t do very well, I’m afraid. I expect he’s got the same sort of mother…

Sadly, when the production team that had filmed Murder on the Orient Express (the 1974 Sidney Lumet version remains one of the greatest adaptations of a Christie novel ever, while the Kenneth Branagh tarted up remake of 2017 is one of the worst) got around to making The Mirror Crack’d, as the film was called, they laid a huge egg.

Starting with the casting of Angela Lansbury as Miss Marple.

Lansbury was just wrong for the part, and the scenes where she has Miss Marple smoking a cigarette are a total travesty (it was Lansbury’s idea to have her smoke (against the wishes of the Christie estate) because she recalled a maiden aunt who had smoked). [Correction Jun 11, 2022: it was Lansbury’s grandmother, not her aunt, who smoked, as I found out when I looked up the nytimes article from 1980.] 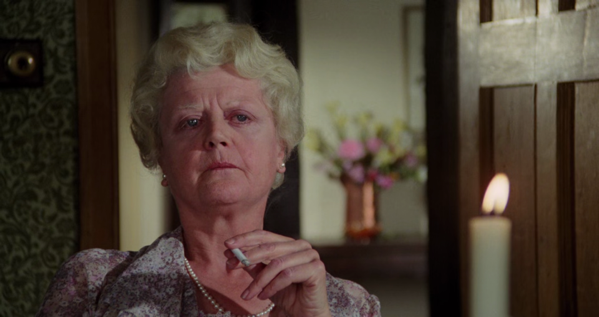 I saw the movie when it came out in late 1980 (Lansbury filmed it in England during the break between her Broadway appearance in Sweeney Todd and her resuming the role of Mrs. Lovett in the touring company).

It’s not just Lansbury that is wrong. The script veers much too far away from Christie, and Guy Hamilton’s lethargic direction doesn’t help matters.

I haven’t had the stomach to watch it again.

Note: When you purchase something after clicking Amazon links in my posts, I may earn a small commission. As of this date, I have yet to earn anything. 😎