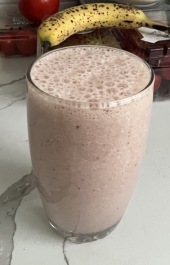 I was rather surprised at how few people named the person in the linked video yesterday (one, although someone else got it with a hint). Just for the record, the person I was referring to is not the one in the far right front seat (who is not, as far as I know, Woody Allen), but the fellow sitting next to him. In fairness, I suspect that I would have found him familiar looking, but I’m not sure that I could have identified him.

Have another go at Can You Name Him?

Meanwhile, I’ve started making protein shakes at least twice a day, and sometimes three. They may or may not have fruit (strawberries, bananas), I like to mix it up a bit for variety. They all have 1% milk (less fat, more protein), one egg, and whey protein powder. And either a teaspoon of brown sugar or stevia. I think it’s safe to use stevia as long as Walter White isn’t around.

And the additional protein seems to be working already; I thought it might take a few weeks to have much of an effect. But I’m sleeping better (at least some nights) and seem to have a bit more energy during the day. As well as a few other improvements in my overall being.

So thanks to Dr. Strong for pointing out my problem.

Meanwhile, I’ve had an echocardiogram this week (remind me never to schedule any more doctor visits during July or August; I have four this month all told, and during a terrible heat wave); the echo (as the pros call it) showed no significant changes since the previous one two years ago. That’s good, right?