There is a row of houses going up in a nearby street. They are seemingly taking forever to complete, as they started on them in the fall. The Zillow page for them is here.

Three floors, four bedrooms, and five baths, they certainly have room for a large family or someone who entertains a lot. 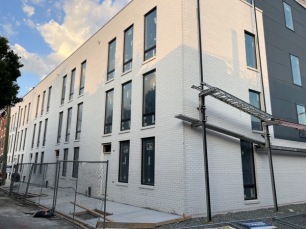 The asking price is just under a million dollars.

In an area where most of the homes sell for less than half that price, I wonder if that’s asking too much.

And I think the white brick exteriors, while perfectly lovely, in a neighborhood where most of the homes are traditional Philadelphia red brick, simply screams, “Look at me! I’m rich! Ha-ha-ha-ha-ha!”

But maybe I’m being too judgmental.

The interiors, from what I can see by peering in the windows and from the pictures on Zillow, look quite attractive, but personally I would not want to live in a house where the stairs have no railings. I’m funny that way.

Still, if they ever offer an open house, I’ll probably run over and take a peek.

One thought on “A Million Dollar House”